It can be quite difficult to interpret what likely exactly means sometimes. For example in the AR5 sea level chapter they report a likely range of 21-33 cm for thermal expansion (RCP8.5 table 13.5). I have taken that to mean that this was the 66% uncertainty interval based on the IPCC uncertainty guideline note (see table 1). However, I just realized that this range was actually calculated as the 5-95% range from CMIP5. From table 1 I would have called that the very likely range. Can anybody explain to me the motivation for calling it the likely range? 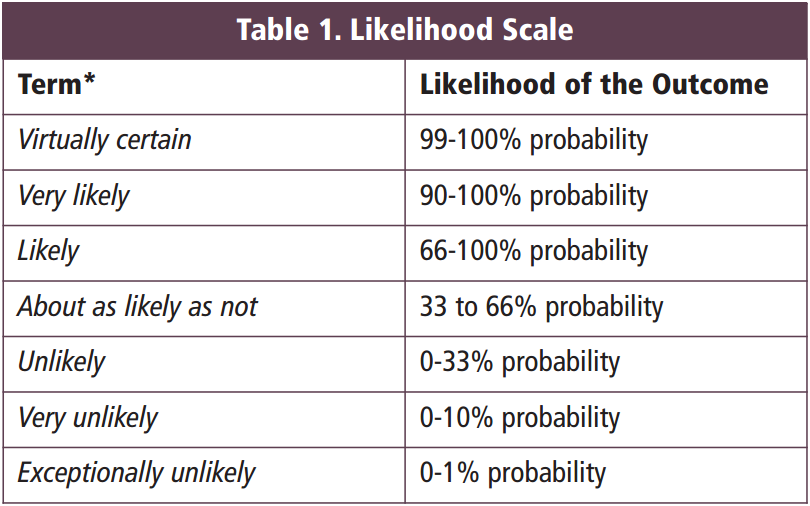 [EDIT2: I asked Jonathan Gregory, and he has been very helpful in explaining the motivation to me. He says: “[Sect 12.4.1.1 explains that] the 5-95% range of CMIP5 models coincides with the assessed likely range of TCR. That’s the main reason for proceeding this way. It implies, as you say, that the CMIP5 models do not cover the entire range which is considered “very likely” but we do not have sufficient confidence to quantify a “very likely” range for projections."]

This also affects other parts of the sea level chapter. For example they say that only marine instabilities could cause a rise greater than the likely range. But does that mean that there is a 33% or 10% or chance of that? I have no idea… (or indeed 5% as they appear to use 5-95% for the likely range in this chapter).

The explanation is that the true uncertainty is considered to be greater than the model spread.

The supplementary material to the sea level chapter says that they follow section 12.4.1.2 when they use 5-95% as the likely range.

_[EDIT: I just found an explanation in an SPM footnote: “Calculated from projections as 5−95% model ranges. These ranges are then assessed to be likely ranges after accounting for additional uncertainties or different levels of confidence in models. For projections of global mean sea level rise confidence is medium for both time horizons."]  _