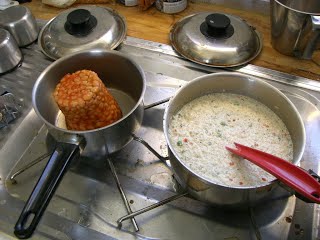 This thesis covers a wide range of methods and research subjects and is thus broad in scope. The methods are applied to ice cores, Antarctic blue ice areas, sea level, and large scale climate variability. Two new ice core proxies for continentality and summer melt were developed for the Lomonosovfonna ice core, central Svalbard. The melt proxy was based on the preferential washout different ions and the continentality proxy on the amplitudes of the annual signal in δ18O. These proxies suggest that summers in the Barents region were as warm (or warmer) than the present during the medieval warm period. A high quality chemical record of environmental changes was proven to be preserved in the core. A simple and flexible flow model based on the continuity equation was developed with the purpose of dating the ancient surface ice in Antarctic blue ice areas. The model has been applied to three very different ice fields in East and West Antarctica. The wavelet coherence and singular spectrum analysis methods were advanced and a phase-aware teleconnections method was developed. The methods were utilized in isolating a ~14 year quasi-periodic component in multiple climate series from the Arctic and the equatorial Pacific. It was determined that the signals shared a common source and a linking mechanism was found. The same techniques were applied for signal enhancement in ground penetrating radar. The proposed wide spread influence of decadal solar variability on climate was scrutinized and it was concluded that the 11-year cycle sometimes seen in climate proxy records is unlikely to be driven by solar forcing. Global sea level was reconstructed from tide gauge data using a new ‘virtual station’ method. The 1920-1945 rate of sea level rise was as large as the rate observed during the 1990s. The impact of major volcanic eruptions on global sea level was studied and it was found that a disturbance of the global water cycle causes a rise in sea level in the first year following an eruption.

After finishing the thesis, I went to Antarctica. The featured image shows a picture of camp life.