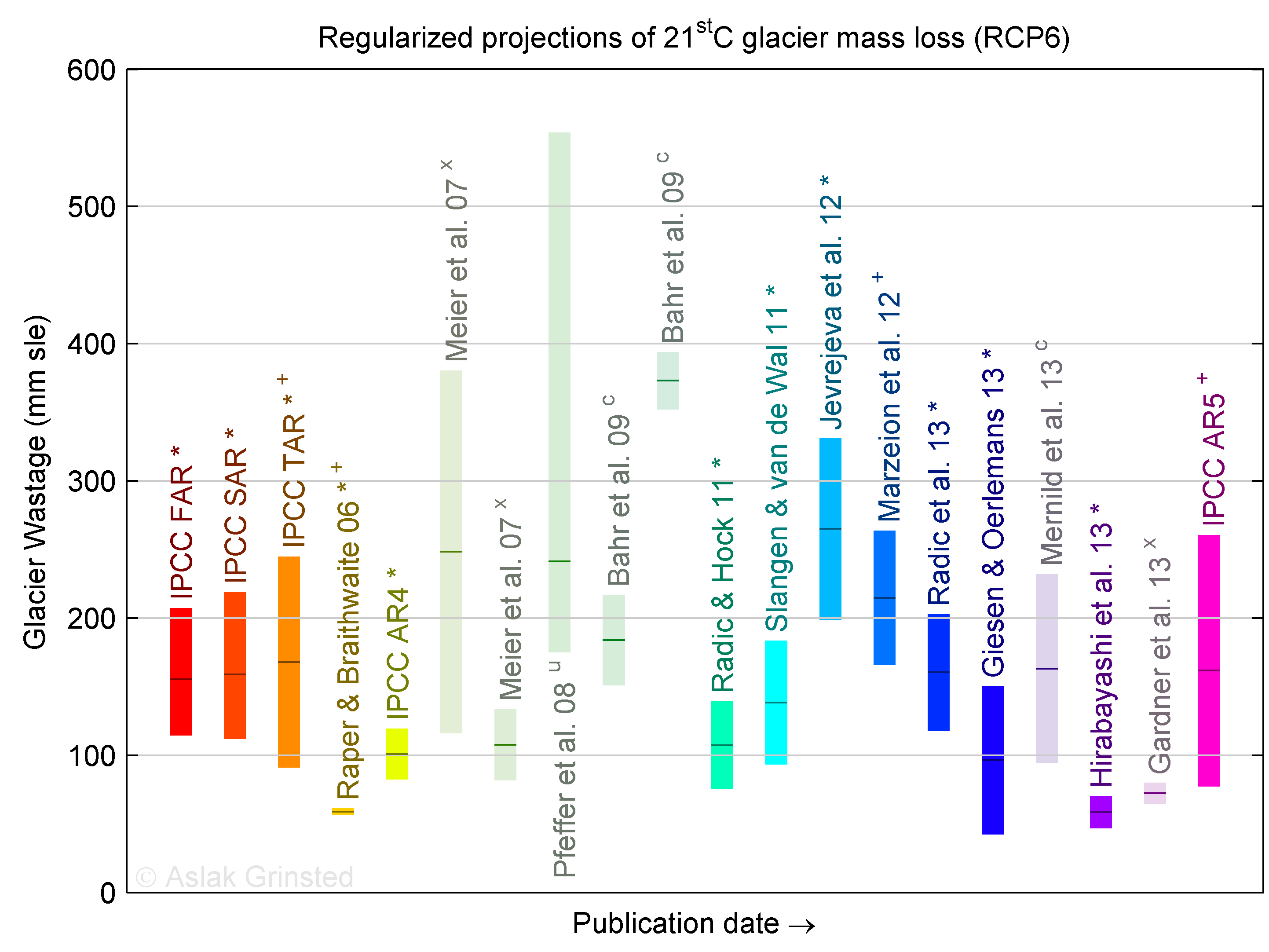 Graham Cogley (2012) regularized a number of projections of glacier wastage in a recent book (so that all numbers include the glaciers peripheral to the ice sheets, and cover the entire 21st century).

I have followed his example but added new projections, and also regularized for the different scenarios used. So in the figure shown i regularize for:

See details on the conversions below.

Please note that the majority of these papers assume an initial glacier mass which is greater than my recent estimate. However, Slangen and van de Wal find that 21stC projections are not very sensitive to initial volume. On the other hand, some of the high end ice loss projections are greater than my total volume estimate of 35 cm!

A plea to modellers

Modellers please model the entire period covered by the PMIP+Historical+RCP45 experiments. This would greatly help in assessing the plausibility of the individual projections. This would allow us to compare the model response to the Leclercq et al. glacier length based volume estimates. I think it is a minimal requirement that the model captures the curvature at the end of the little ice age. If it doesn’t then you should reconsider how your model is being calibrated.

c committed loss rather than a 21stC projection.

u deliberate search for upper bound (not 1sigma, but 3 distinct estimates)

Lighter shading: Not an actual projection for the 21stC. Used for commitment, upper bound, and extrapolation estimates.

My personal assessment is that the AR5 is good both in terms of central estimate and uncertainties. (Unlike my view of the ice sheet projections.) That does not mean it could not conceivably be higher because all projections suffer from sparse data, poor precip handling, and how to deal with marine terminating glaciers.

These are the multipliers used to convert original projections into RCP6:

Radic et al. 2013 and Giesen and Oerlemans 2013 are the only projections that use Randolph Glacier Inventory and include both the Greenland and the Antarctic periphery. So I base it on the average of these two papers. I get the 21stC projections for these regions to be

_I intend to keep this page will be updated. You can tweet, mail, or comment if you have more studies i should add. _

Note: the painting in the featured image for this post, is by Jill Pelto. It shows historical data for glacier mass loss in the North Cascades. Follow the link and check out her other work.