We show in our paper that the surge index correlates with major land falling hurricanes with a correlation coefficient of 0.6. As expected this correlation improves with smoothing (see paper or table below). We show that the vast majority of the 50 greatest surge events can be related to known land-falling hurricanes.

Yet Pielke Jr. still objects to our interpretation that the surge index is primarily a record of hurricane surge threat. He arrives at this conclusion by picking a pre-processing line that results in a low correlation. He restricts the record to the 150 greatest events and observes that the number of extreme surges has a relatively small correlation coefficient with major landfalling hurricane counts. It is unreasonable to expect that surge magnitude can be fully explained by wind speed alone, and thus there is no surge threshold that corresponds exactly to landfalling hurricanes and nothing else. Similarly you would not expect hurricane damage to be fully explained by wind speed alone.

In the comment thread Roger Pielke Jr bends the truth when he states: “_The answer is that normalized damage systematically outperforms the surge index. _The fact that the surge index is not well correlated with other measures of hurricane activity should be a first tip-off that it is not adding much value”. To demonstrate just how ludicrous this claim is then we can just test which series correlates best with standard measures of hurricane activity: NHD or the Surge Index. I do that in the table below (following the approach here). Green indicates that surge index correlates better, and red indicates NHD correlates better. 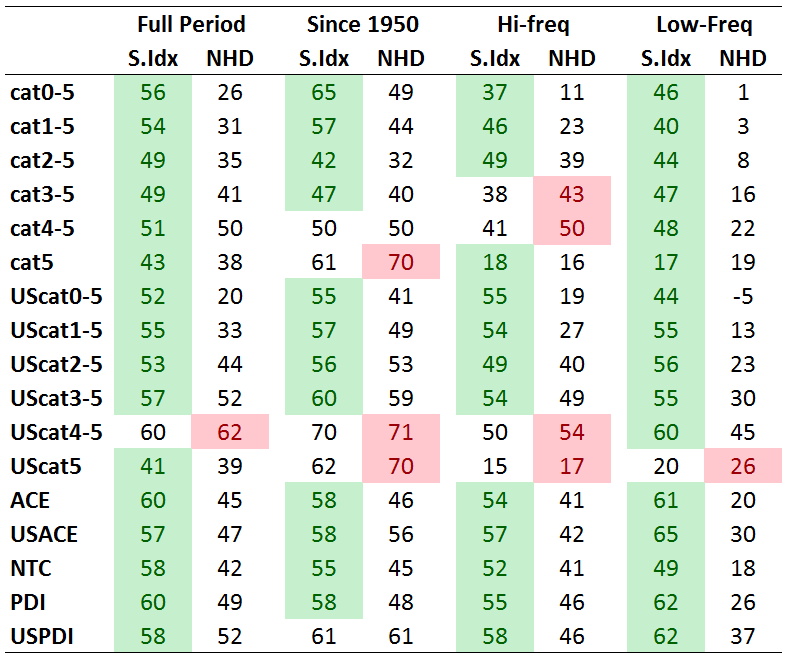 _Note: correlation coefficients are slightly different than in our paper here because the interval has been restricted to 1923-2005. _

We would not expect perfect correlation between damage and wind speeds but we would expect closer agreement as we average more events. One very curious thing about the NHD is that the correlation coefficients become worse (even decidely poor) when you appply a 5 year moving average to the series (this is called low-freq in the table above). This is extremely hard to explain unless the NHD is influenced by a strong non-climatic residual trend.

I suggest that PielkeJr follows his own advice: “if you are looking for climate signals in extreme events, look first at climate data” - do not use the loss records. Yet he is continuously trotting out the normalized damage record in the media to imply that there is no climatic trend in hurricane activity.

I find it interesting to plot the frequency of extreme normalized damage events. I have a chosen to define extreme damage so that so that it corresponds to roughly the same number of events as UScat1-5. 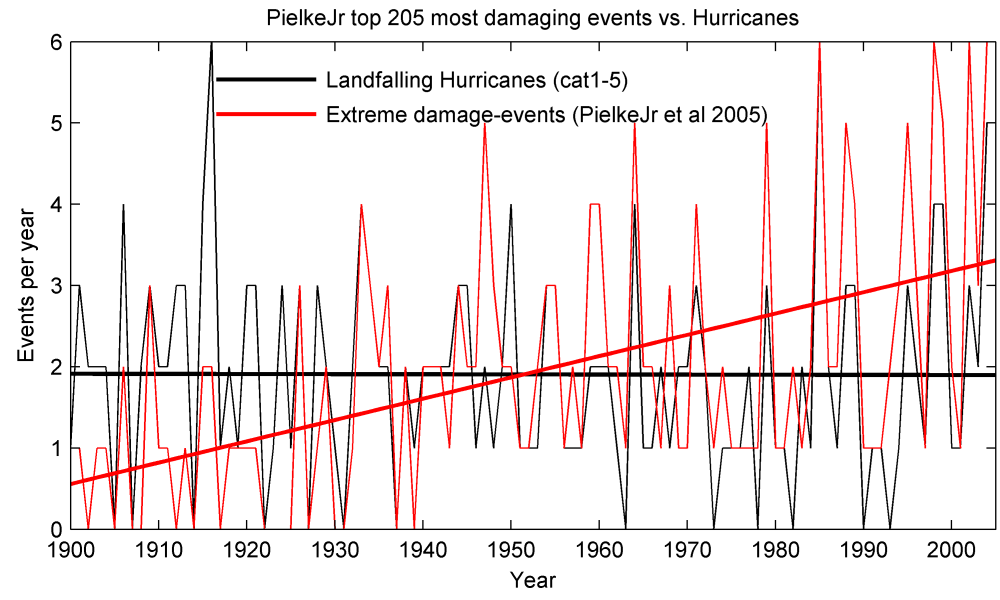 Surprisingly there is a strong trend. Let me emphasize that the same clear trend is not in total normalized damage per year. It clearly shows that the distribution is not stationary. I find Pielke’s explanation that this is partly due to changes in reporting plausible and even probable. However, the point is that this suggests that the normalization has not removed all non-climatic influence, and that with this normalization damages are not stationary. I also note that there is also a positive trend in the frequency of top150 and top50 damage events. (see also this)

I am not trying to bash the NHD or the normalization scheme that Pielke has devised (even if i think it only corrects for the dominant effects). It is important work, and I think he is right to attack the use of non-normalized records. I merely want to say there is a limit to what we can hope to get out of the damage records. It is not possible to fully correct for the huge societal changes over the 20th century to the point where we can extract the climatic trend in damages directly. Instead I propose that we look at individual events and the high frequency signals if we want to tease out the sensitivity of damages to changes in environment (e.g. warming / hurricane statistics / surge statistics).

I guess there is no reason to look at other data when you already have found bias adjusted data that tells you what you want to hear. Or as Pielke Jr says: “If you want to look at trends in hurricanes, there is absolutely no need to construct abstract indices as there is actually good data on hurricanes themselves.” -Except of course that pretty much everybody agree that this “good data” needs to be corrected for a significant bias in the pre-satellite era. I invite anybody to look directly at the surges recorded in the tide records themselves rather than my abstract index if they prefer.

_Disclaimer: This is not a blog but my personal homepage, and I do not invite comments on this page. _I will edit this page as I see fit. Consider this a public draft. Mail or tweet me if you have any comments.