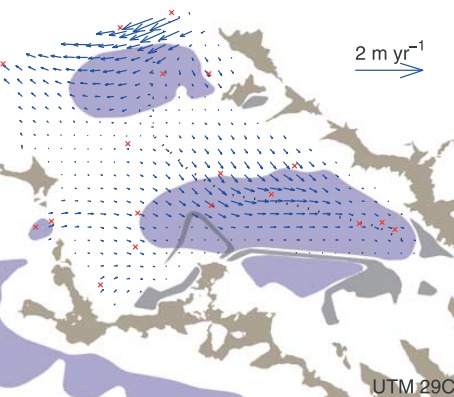 We show that it is possible to extract a high-resolution (annual) paleoclimate record from the surface of a blue-ice area (BIA). The variability of the surface stable-isotope values suggests that almost all the surface ice in Scharffenbergbotnen BIA, East Antarctica, is of Holocene age.

The isotopic changes across the BIA show that the modern climate there is warmer than the climate in the early- Holocene optimum (11 kyr BP). A volume-conserving ice flow model for the BIA constrained by isotopic variability and layer thicknesses, and a series of 14C ages indicate both that the BIA has been smaller than now, and that the surface velocities were considerably smaller during the Last Glacial Maximum. Changes in ice-sheet thickness drive the BIA towards present-day conditions. The relatively young age of the majority of the BIA also explains the lack of meteorite finds in this area, and may be typical for many BIAs in low-elevation nunatak areas. 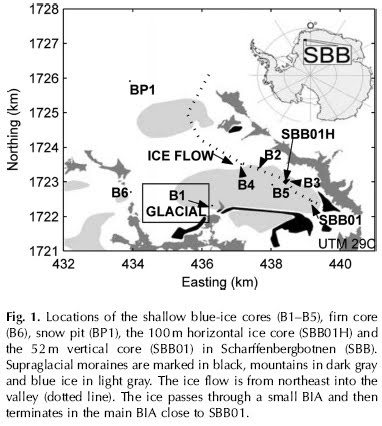 I also highly recommend Anna Sinisalo’s excellent PhD thesis. It contains the more recent knowledge on Scharffenbergbotnen. There is also lots of very useful information if you ever plan to make paleo-climatic studies in an Antarctic Blue Ice Area.